Nobody: I will pardon every drug conviction in NH History

My name is Nobody, and I am running to be the next Governor of New Hampshire. This is an official policy statement:

If elected as Governor, I will pardon every single New Hampshire victim of the War on Drugs.

The War on Drugs is a human rights nightmare. It was created by the Nixon administration for the purpose of suppressing two cultures that Nixon considered to be enemies: hippies, and blacks.

In the words of his former domestic policy chief, John Ehrlichman,

“We knew we couldn’t make it illegal to be either against the war or black, but by getting the public to associate the hippies with marijuana and blacks with heroin. And then criminalizing both heavily, we could disrupt those communities,” Ehrlichman said. “We could arrest their leaders. raid their homes, break up their meetings, and vilify them night after night on the evening news. Did we know we were lying about the drugs? Of course we did.” CNN

Nobody Tells the Truth about the War on Drugs

Nobody in government wants to admit that the War on Drugs is a colossal failure.

I know a bit about addiction and the War on Drugs. I spent 22 years in recovery, counseling addicts. I have been in the cannabis business, and understand how the drug war economy works.  I spent a year and a half in jail for cannabis and a psychedelic drug. I watched my wife die due to government meddling in her medical care. I have seen the War on Drugs up close and personal, and I did not like what I saw.

Using opiates is a suicidal gesture.  It is something people do because they want to escape their lives. Here are some non-solutions to that problem:

There are countries that have solved this problem. Switzerland and Portugal are great examples. And there are countries, like ours, where the government takes sick people and treats them like criminals.  It is in the “lock ’em up” countries that the Opiate Epidemic is in full flower. In the (very few) “leave ’em alone” countries, it is waning.  This is not to say that we should ignore or tolerate actual crimes committed by addicts.  If an addict violates the rights of another, than they should be dealt with just like any other criminal.  But they should not be punished for being addicts.

If you care about somebody with a drug problem, Elect Nobody.  Because Nobody should persecute your loved one for being an addict.

Here is a TED talk by the author of “Chasing The Scream”:

Everything You Think You Know About Addiction Is Wrong!

Nobody Fights The State, and Wins! 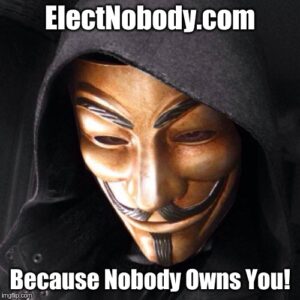